Herman Boerhaave and the Reform of the Chemical Arts

In Inventing Chemistry, historian John C. Powers turns his attention to Herman Boerhaave (1668–1738), a Dutch medical and chemical professor whose work reached a wide, educated audience and became the template for chemical knowledge in the eighteenth century. The primary focus of this study is Boerhaave’s educational philosophy, and Powers traces its development from Boerhaave’s early days as a student in Leiden through his publication of the Elementa chemiae in 1732.

Powers reveals how Boerhaave restructured and reinterpreted various practices from diverse chemical traditions—including craft chemistry, Paracelsian medical chemistry, and alchemy—shaping them into a chemical course that conformed to the pedagogical and philosophical norms of Leiden’s medical faculty. In doing so, Boerhaave gave his chemistry a coherent organizational structure and philosophical foundation and thus transformed an artisanal practice into an academic discipline. Inventing Chemistry will be essential reading for historians of chemistry, medicine, and academic life. 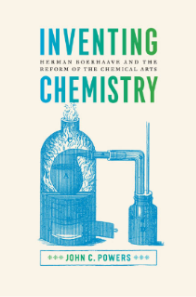